Wow- It have really been long sense i posted something so here is an update.

First of all we have now moved into our new apartment and we are fully settled in the only thing is that we miss some lamps here and there. My new craftingspace is done and I now share an officespace with Bjorn. The craftingspace is just super but I have had no inspiration or will do craft any at all unfortunate.

I’m now i week 30 and everything is well, both mentally and physically, and the big day just comes closer and closer. Almost all thoughts in my head right now is about kids and that might be why my crafting is on a low. I have been thinking a lot on memorykeeping in the form of my photoalbums and I have bought a Project life album, some inserts and a core-kit. My first thought was to start and album for out little one but then I decided to start getting all my old photos in order. Right now they are in a few album , in total caos.

So for the last couple of weeks I have been ripping out all my photos and trying to sort them some what. I used an box which I made dividers for so when I stumble over photos from different times in my life I can put them in somewhat order.The biggest folder is right now is all my photos from when I lived in Uppsala with is like 10 years so I will sort through that again and hopefully get then in the right year. I’m still not done with getting all my photos off all the old albums and boxes but it’s nearly there.

Even if I’m not done sorting the Photos I wanted to actually put something in my album so I decided to take my photos from my family’s trip to Crete and get them into the album. They are not to many and I wanted them at the same place so Yesterday I spent all night with just making the titelcard. I was a bit fun but I still didn’t wanna be in my craftingspace so I have mobilized myself into the living-room instead. I’m using the Jade core-kit for this part and I’m planning to use the very cheerful Honey for our baby when she comes. The plan is that I tonight will get at least one photo in but we will see sense i ended up here… 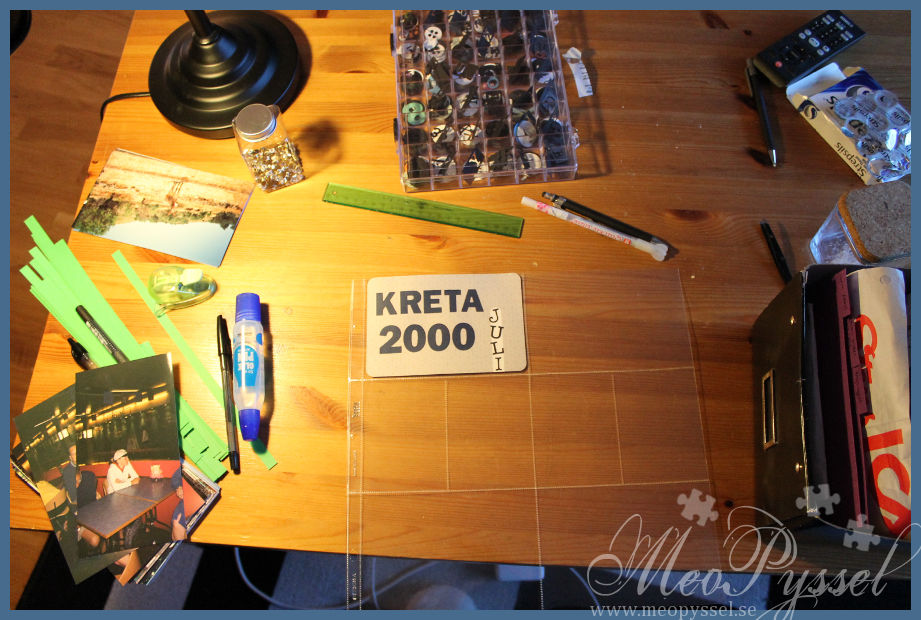 The living-room is the room that is still missing a ceiling-lamp so you will have to excuse the very yellow photos.

I think that was all for today but I hope I will be back very soon for another update of some kind:)